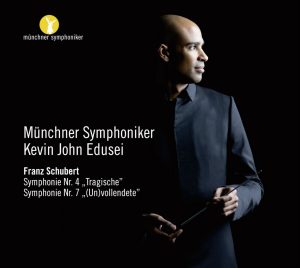 The present release of Symphonies 4 and 7 must be understood both as an evaluation of the joint work over past years with the Münchner Symphoniker, and also as a look ahead at what is yet to come. Which composer would be better suited to such a Janus-like look than Schubert – for whom the open, the unspoken and the hoped-for played such an enormous role compositionally as well as biographically?

The logo of the Munich Symphony Orchestra shows a golden angel on the banks of the river Isar – wing tips point skywards, keeping vigil over the Bavarian capital. As one of the city’s four symphony orchestras, the Munich Symphony is strongly committed to Munich and its musical traditions. “The Sound of Our City” is the orchestra’s motto as well as its mission: With four subscription concert series in all of Munich’s major concert venues, the Munich Symphony is one of the city’s most renowned ensembles, while on its numerous national and international tours it takes the “Sound of Our City” out beyond the city boundary.
Kevin John Edusei is one of today’s most promising young conductors. He is known for his delicate, clear conducting which creates space for new nuances in a wide-rangingrepertoire from baroque to contemporary music.Since the season 2014/2015 he has brought exceptional new visions to the Münchner Symphoniker as their chief conductor and has established a strong relationship with the audience.