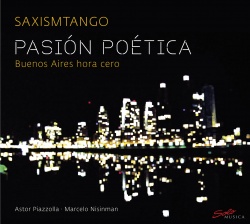 The title of this SAXISMTANGO album is “Pasión poética” – poetic passion. The cosmopolitan ensemble’s passion is the tango, which the three musicians grew up with in Buenos Aires and Montevideo.

The group adds saxophones and clarinets to the traditional tango instruments bandoneón, guitar, piano and double bass. That creates a unique instrumental sound which largely bears the stylistic stamp of Marcelo Nisinman’s composition and arrangements. Tango songs authentically interpreted by the singer Marcela Arroyo represent another focal point in the album.

“The idea came to me one day as I was looking at an anthill at my feet. I realized that there is no major difference between them (the ants) and me, a simple human being.

“Where is the anthill? Below what do I see it? Or could we be part of a greater sub-anthill? Perhaps the only difference between what we call ants and people is the symbolism.

“And the insects began to dance, and music came into my mind, a new tango …”