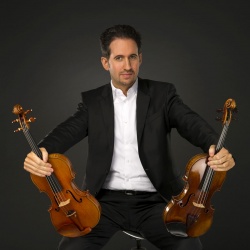 Hamburg born violinist and conductor, Philip A. Draganov, has enthralled audiences in Europe, Asia and the USA with his „impulsive virtuosity… and exuberant musical power” (Hamburger Abendblatt). He had his debut as soloist at the age of only twelve with the Hamburg Symphony Orchestra in the Laeiszhalle in Hamburg and has since enjoyed a multifaceted international career.

Philip A. Draganov has performed in many renowned concert halls such as Carnegie Hall/New York, Tonhalle Zürich, the National Centre for Performing Arts in Beijing, Kölner Philharmonie, Laeiszhalle Hamburg, Festspielhaus Baden-Baden and Alte Oper in Frankfurt. In addition, Draganov has performed at important music festivals such as Aspen Music Festival/USA and Schleswig-Holstein-Musik-Festival.

For almost 20 years, Draganov has devoted himself intensively to the training and education of highly talented young violinists. Many of his current and former students are prize winners of national and international violin competitions. Draganov teaches students from around 10 years of age up to college level and is one of the most successful teachers for highly talented students in Switzerland and Europe. As a guest professor, he has been invited to teach at various music universities, master classes and festivals in Germany, Switzerland, Russia, Italy, Spain, South Korea and the USA. Moreover, Philip Draganov is member of the European String Teachers Association and juror for international competitions.
His edition of Tchaikovsky’s Violin Concerto will be published in 2017 by the Gilgenreiner-Verlag. In this edition the author compares all relevant sources such as the autograph, the first print of the score, the first piano reduction and the second edition, revised by the composer.
Since 2010, Philip A. Draganov has been Artistic Director of “Youth Classics” (www.youth-classics.com) The “Youth Classics International Music Festival and Masterclasses” is a meeting place for students from all over the world to connect with internationally renowned teachers.

After private lessons with Roland Greutter in Hamburg, Philip A. Draganov had received lessons with Uwe-Marin Haiberg already at the pre-college of the University of Arts in Berlin. He then went on to study at the Juilliard School in New York with Margaret Pardee, Masao Kawasaki, Robert Chen, and chamber music with Felix Galimir. In Europe, he studied with Herman Krebbers in Amsterdam, Ida Bieler in Düsseldorf, Jens Ellermann in Hannover and Nora Chastain in Zürich. He received important ideas and impulses from master classes with Ana Chumachenco, Thomas Brandis, Rosa Fain and Hatto Beyerle (Alban Berg Quartet).
Parallel to his violin studies, Draganov received his diploma in conducting from the Zurich University of the Arts.

At the age of 10, Philip Draganov won the first prize at the “Jugend musiziert” competition in overall Germany. In the following years to come, he won numerous awards and competitions such as the “Wettbewerb zur Förderung junger Künstler”. He received, among others, the scholarship from the Oscar and Vera Ritter Foundation.

In the last 10 years, Draganov has started to focus and perform more as a conductor. He has worked with professional and youth orchestras such as the Zurich Chamber Orchestra, members of the Tonhalle Orchestra, Karlsbad Symphony Orchestra (Czech Republic), Pre-College Orchestra Zürich (Zurich University of the Arts), YOUTH CLASSICS Orchestra and Seongnam Music Festival’s youth orchestra (South Korea). Since 2007, Philip A. Draganov conducts his own orchestra, Chamber Orchestra MKZ, which has become one of the leading youth orchestras in Switzerland. With this orchestra, he regularly performs in Switzerland and has been invited for concert tours to several German concert halls such as Festspielhaus Baden-Baden and Laeiszhalle Hamburg. Philip A. Draganov is an active supporter of the Childhood Cancer Research Foundation Switzerland and gives an annual charity concert to support this cause in the Tonhalle Zürich.

Draganov plays a violin made by the Italian violin maker Tomaso Balestrieri from 1769 and a violin from the German luthier Peter Greiner.
He lives near Zurich. 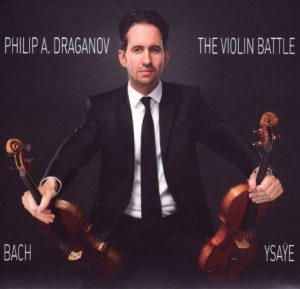