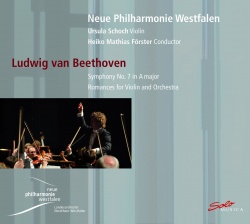 The year 2010 has given the Neue Philharmonie Westfalen another opportunity to present itself and the culture of the Ruhr to audiences from far beyond the region, with the orchestra being represented at many levels in the programme of the European Capital of Culture RUHR.2010 – whether within the framework of Local Heroes Weeks, the Henze Project, “!SING Symphony of a Thousand” conducted by Lorin Maazel or the internet opera of the Ruhr Music Theatre – and yet again functioning as an ambassador for culture.

Ursula Schoch played in the Berlin Philharmonic Orchestra under Claudio Abbado for two years. In 2000 she became leader of the Concertgebouw Orchestra in Amsterdam, which with its principal conductor Mariss Jansons is one of the most popular European ensembles.