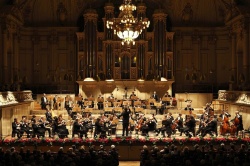 The Neue Philharmonie Westfalenwas formed in 1996, when two orchestras in the northern Ruhr region merged: the Westphalian Symphony Orchestra of Recklinghausen and the Philharmonic Orchestra of Gelsenkirchen. The orchestra is jointly financed by the state of North Rhine-Westphalia, the cities of Gelsenkirchen and Recklinghausen and the district of Unna. The Austrian conductor Johannes Wildner was general music director of the Neue Philharmonie Westfalenfrom 1997 to August 2007. He was followed in the summer of 2007 by Heiko Mathias Förster, who had previously conducted the symphony orchestras of Brandenburg and Munich.

The Neue Philharmonie Westfalenis one of the largest orchestras in the region, giving almost 300 performances at home and abroad each season. The 130-strong ensemble is able to cover the entire range of orchestral literature from the Baroque to present-day. Film and crossover concerts are also part of the ensemble’s programme. In addition to performing at the Musiktheater im Revier in Gelsenkirchen and at symphony concerts throughout the Ruhr region, the orchestra spends a good deal of its time working with children and young people.

The largest of the three orchestra administered by the state of North Rhine-Westphalia, the Neue Philharmonie Westfalenpursues a policy of passing outstanding projects down to posterity by recording them. CDs released of works by Anton Bruckner, Johannes Brahms and Max Bruch conducted by Johannes Wildner have been followed by various recordings conducted by Heiko Mathias Förster that include Gustav Mahler’s First and Fifth symphonies, three CDs of works by the Strauss family and the “cool rhythm” CD together with the Berlin saxophone quartetclair-obscur.

In recent years, the orchestra has succeeded in making a name for itself far beyond the Ruhr region. The Neue Philharmonie Westfalenhas, for example, given acclaimed performances of the “Lord of the Rings” Symphony at places like Speyer Cathedral (a World Heritage site), the philharmonic halls of Cologne and Berlin, Die Glockein Bremen, the Franziskanerin Villingen, the Teatro Dante Alighieri Ravenna, the Teatro Comunale di Modena, the Tonhalle in Zurich, the Musical Theater in Basel and the Kölnarena(now Lanxess Arena, Cologne). The orchestra performed Heiko Mathias Förster’s Wagner adaptation “Ring ohne Worte” (Ring without words) at the Great Festival Theatre in Salzburg in September 2009. The ensemble made its overseas debut quite early on, in the autumn of 2000, when it accepted an invitation to perform at the Beijing Festival.

Recently, the Neue Philharmonie Westfalenhas increasingly made a name for itself by touring with leading soloists. Concerts with Lucia Aliberti, Elina Garanca, Lang Lang, Herbie Hancock, Edita Gruberova and Vittorio Grigolo were followed in 2012 by a tour with Anna Netrebko, Ramón Vargas and Erwin Schrott in Münster, Mannheim and Wiesbaden.

As a student registered for piano studies, Mecklenburg-born Heiko Mathias Förster could have had no inkling that he would one day become the conductor of a large orchestra. He soon gave up the piano for conducting, however, and at the age of only twenty-three became principal conductor at the Brandenburg Theatre and later took over the Munich Symphony Orchestra.

Since the summer of 2007, Heiko Mathias Förster has been general music director of the Neue Philharmonie Westfalen, an orchestra that not only performs at symphony concerts but is also the opera orchestra of the Musiktheater im Revier in Gelsenkirchen.The operas he has conducted there include Verdi’s Otello, Camille Saint-Saëns’s Samson et Dalila and the German first performance of Isaac Albéniz’s Merlin. Förster also regularly conducts opera productions in Prague and Bratislava.

Förster is a favourite with opera stars. The singers he has worked with include Rolando Villazón, Elina Garanca and Angela Gheorghiu, and he also collaborated with the brilliant German humorist Vicco von Bülow alias Loriot in his project called “Der Ring an einem Abend” (the Ring in a single performance).