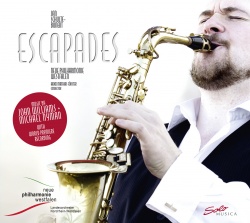 The saxophone was named after the Belgian instrument maker Adolphe Sax. Whether as a solo instrument or as part of the orchestra, it seldom appears in concert halls and opera houses today. Nonetheless, before the instrument found its his true home – the world of jazz  – it was to be heard in classical music. Its first prominent appearance was in Georges Bizet’s incidental music to Daudet’s L’arlésienne in 1872, yet it failed to establish itself in the orchestra. There are however countless chamber works for the saxophone and many concertos for saxophone and orchestra. Three particularly brilliant and virtuosic concertos are presented on this CD.

John Williamsis today Hollywood’s leading film composer. Escapades for saxophone and orchestra is based on the music to Catch me if you can, the 2002 comedy about a con man starring Leonardo DiCaprio and Tom Hanks. It was directed by Steven Spielberg, who in this film worked with “his” composer John Williams for the twentieth time.
Michael Nymanis one of the most dazzling figures in the post-modern music scene. Where the Bee dances was commissioned by the Bournemouth Sinfonietta and performed on July 13, 1991 during the Cheltenham Music Festival.
Andrei Eshpaiwas born in 1925 the son of a composer and folk song researcher in Russia. He wrote the Saxophone Concerto in 1985/86.

„Where the Bee dances“ for Saxophone and Orchestra
Music: Michael Nyman