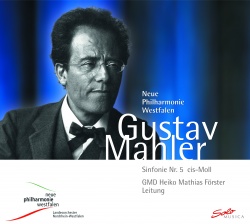 The message was dismal and boded ill. Written at the beginning of the twentieth century, Gustav Mahler’s Fifth Symphony began by burdening the beginning of the new age with a fateful omen in the first movement. A funeral march opens the work – uncanny, oppressive and almost totally lacking in the heroic pathos that had characterized the funeral march at the beginning of Mahler’s Second Symphony. The opening movement of the Fifth is dominated far more by the “self-pitying pogrom mood” , stemming from the bleak experience of having grown up in a ghetto, with which Alma Mahler often cynically described her husband’s frame of mind. The first people who heard the Fifth were disconcerted. “After the scherzo there were even hisses”, Mahler noted of the premiere, which took place under his direction in Cologne on October 18, 1904. Only the Adagietto, the fourth movement, received the unanimous approval of the audience and press from the beginning.