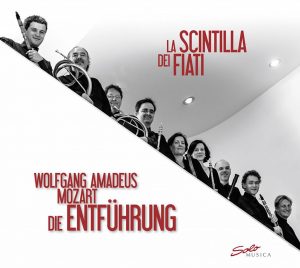 A letter from Mozart to his father in July 1782, four days after the successful first performance of Die Entführung aus dem Serail, attests to Mozart’s serious attempts to share in the lucrative yet highly-competitive market for Harmoniemusik arrangements. A furore was caused in 1977 by the discovery of a corresponding Harmoniemusik in the collections of the Schwarzenberg Chapel in Bohemia’s Český Krumlov, which in fact turned out to be the work of Johann Went, a former Schwarzenberg court musician, at that time second oboist of the Kaiserlichen Harmonie. In all probability, Went was that rival so feared by Mozart. However, the most exciting – and in some respects still puzzling – discovery in this connection so far fell ultimately to the conductor and researcher of Harmoniemusik, Bastiaan Blomhert. In 1984 he came across an unusually interesting and superior arrangement in the Princely Fürstenberg Archive in Donaueschingen. An inventory dated 1827 attributes the surviving set of handwritten parts of the Harmoniemusik to the Donaueschingen oboist and arranger Franz Joseph Rosinack. However, doubts that this version of the Entführungcould really have been penned by a musician of somewhat parochial proficiency were soon justified. Two further versions of Mozart operas ascribed to Rosinack – The Marriage of Figaroand The Magic Flute– written by the same copyists on paper unusual for Donaueschingen, proved in the case of Figaroto be the work of Johann Went, and in the case of TheMagic Flutethat of the no less well-known arranger, Joseph Heydenreich. Blomhert’s exhaustive comparison with the working methods of other important arrangers of the time did not reveal any compelling correlations, and his hunch – that the Donaueschingen Harmoniemusik of the Entführungaus dem Serailwas probably a transcript of the lost Mozart arrangement – has since achieved broad consensus amongst researchers.
The wind ensemble “La Scintilla dei Fiati” is composed of members of the “Orchestra La Scintilla” at the Zurich Opera.