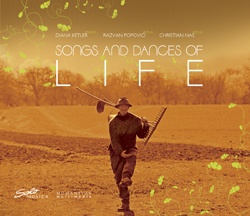 Title: Songs and Dances of Life

Members of the Ensemble RaRo are playing Romanian Songs and Dances of BARTÓK, SCHUBERT, MARTINU and other composers

The ensemble Raro was created 2004 by four outstanding musicians, whose goal is it to create unusual chamber-musical moments. In order to realize this as consistently as possible, the ensemble prefers the position „Ensemble in Residence “, which has it in Munich, Traunstein, Augsburg, Germany, Bucharest and Kobe, Japan. Diana Ketler, who’s been ask to became in 2001 a professor for piano at the Royal Academy of Music in London, and being a Soloist with considerable Orchestras in nearly all countries in the world, uses themselves passionately for the music of the Baltic countries and works closely together with composers such as Peteris Vasks and Arvo Pärt. Razvan Popovici plays as soloist in several European countries. Its participation as a viola player under Abbado, Harnoncourt, Maazel and Wand coined its career. He created the Ensemble Raro and is Initiator of several important Music Festivals.

After this release a new Co-Produktion with the “Bayerische Rundfunk” with works of Peteris Vasks and Johannes Brahms follows this autumn on the Solo Musica Label.