Claude Weber has been playing the piano since he was six years old. After several years of private lessons in piano and organ, he receives a ‘Premier Prix’ in piano at the Music Conservatoire of the City of Luxembourg in the class of Marco Kraus. He then studies with Stan Ford at the University of Music and Performing Arts (Mozarteum) in Salzburg and graduates with honours.
He performs in numerous concerts as a soloist, an accompanist and in chamber music. A special preference is given to unusual chamber music formations and little played repertoire. The effort to share the clarity of musical thought with fellow musicians as well as with the audience is always the focus of his playing.
This CD marks the culmination of a long musical exploration of the considered lost Lieder of the Luxembourg composer Helen Buchholtz. Since the year 2000, Claude Weber, together with other musicians, musicologists and music educators, has been gradually presenting Buchholtz’ complete works for solo voice and piano in numerous concerts and on a first CD recording in 2003. 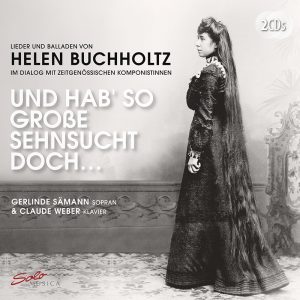