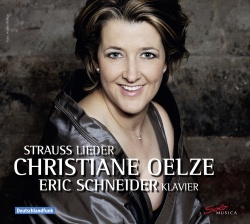 Do you like Strauss Lieder? You will love it, after listen to this wonderful CD! It is almost unbelievable how colourful, these pieces are going to be, when Christiane Oelze goes on it to sing. Oelze has done the right thing, to select this repertoire for her currant CD, it seems, that these songs are made for her wonderful sounding voice and their vital artistic personality. Richard Strauss was a colossal melodic, a brilliant Orchestrator, and a great Narrator. On this CD you will get to know all the creative periods. You listen to well-known songs such as “Allerseelen”, and later Brentano songs such as „Säus’le liebe Myrthe” and Strauss’ last great work at all, the „Vier letzte Lieder“, for high voice and Orchestra here in a piano version arranged by the pianist Eric Schneider.

In addition to her work in Opera and concert, Christiane Oelze has dedicated herself building a challenging and varied song repertoire; accompanied by many well-known pianists and their longtime song partner Eric Schneider.

Many of their recordings of the songs received high praise in the press, including songs by Anton Webern, settings of Goethe, and last but not least ‘forbidden songs’ the exiled composer Ullmann, Korngold and Weill.