Power of expression and technique: the combination of these two musical qualities makes the composer Franz Liszt distinctive, and it is also of special significance for the Hungarian-Swiss pianist Andrea Kauten. Her playing has been substantially shaped by the piano music of this Hungarian virtuoso.
Andrea Kauten began her piano studies at the age of seven with the Basel pianist Albert Engel. At the early age of 13 she got through to the final round of the Jecklin Musiktreffen competition for young musicians in Zurich, and in the following year she was awarded first prize at this same competition. Kauten subsequently studied at the Basel Music Academy, and then – most importantly for her – at the internationally renowned Franz Liszt Academy of Music in Budapest, where she worked with Zempléni and Edith Hambalkó. Here, where world-famous artists such as András Schiff, Jenö Jandó or Ferenc Fricsay were also taught, she refined her highly romantic yet controlled style of playing.

Passion, musicality and a high level of technical ability characterise her playing, and these qualities enable her to draw subtly as well as powerfully expressive sounds from the piano, continually taking her listeners by surprise. Bruce Morrison wrote of her in the Gramophone: “Flushed and at times over-assertive, Kauten leaves you in no doubt of her commitment and intensity”.
In 1993 Andrea Kauten released her first CD with works by Franz Liszt, Carl Goldmark and Sergei Rachmaninov. Since then she has focused on work abroad, in the USA, Canada, Denmark, France and Germany. In 2006 Sony Classical issued her recordings of Robert Schumann’s Fantasy in C Major op. 17, Kreisleriana op. 16, and the Romances op. 28, nos 2 and 3. In the Liszt anniversary year 2011 she added to her extensive catalogue of recordings for Sony Classical with Liszt’s two great piano sonatas, the B Minor Sonata of 1835 and the Dante Sonata of 1849, as well as with two further works from the Années de Pèlerinage. Besides her work as a concert pianist, Andrea Kauten is Artistic Director of the Chamber Music Series of the Anneliese Benner-Krafft Foundation in Schopfheim-Fahrnau (South Black Forest). 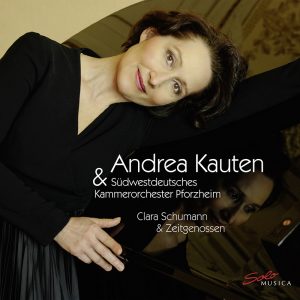 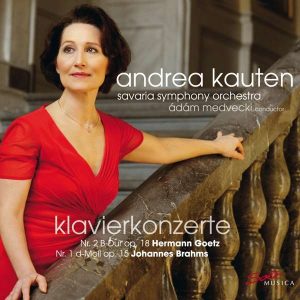