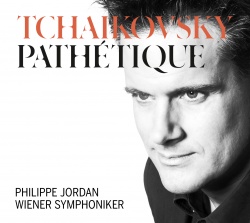 October 25, 1893 (November 6 according to the Gregorian calendar): Death-knell bells tolled all over Russia for Pyotr Ilyich Tchaikovsky, and the Tsardom of Russia arranged for a lavish state funeral.

Doctors interviewed by the newspapers also confirmed the cause of death as uremia due to cholera. But soon there were an increasing number of medically corroborated dispatches that hardened suspicions of premeditation and even spoke of suicide by poison. Then the idea of the Symphony in B minor as a requiem for himself began to circulate, and a myth was born.

December 14, 2013: A recording session in the Golden Hall of the Vienna Society of the Friends of Musicmarks the dawn of a new era for the Wiener Symphoniker. The history of this traditional Viennese orchestra is filled with 282 celebrated performances of P. I. Tchaikovsky’s Pathétique. And now the orchestra’s new chief conductor Philippe Jordan will show what he’s made of by interpreting this highly significant work. The orchestra’s intense involvement with Tchaikovsky’s Sixth began in 1903 with the legendary Russian conductor Vasily Safonov and the previous ensemble, the Wiener Concertverein.