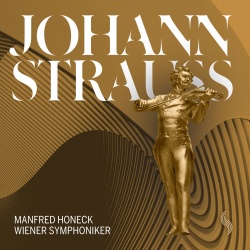 The Viennese Waltz, the oldest of the ballroom society dances, emerged from the „German Dance“ and – possibly – also from the „Landler“ during the second half of the 18th century.

In the numerous establishments of the Viennese suburbs, the ensembles of rivaling bandmasters Joseph Lanner (1801 – 1843) and Johann Strauss I (1804 – 1849) publicly played dance music and hence they may be considered as the actual„inventors“ of the Viennese Waltz as it is commonly understood and loved all over the world today.

After the early death of Johann Strauss Sr., his oldest son Johann (1825 – 1899), the „Waltz King“, assumed leadership of the orchestra and diversified the area of activity significantly. The youngest of the sons of Strauss Sr., Eduard (1835 – 1916), also trained as a musician and joined his brother‘s ensemble at the age of 20. The middle son, Josef (1827 – 1870), had different plans for his life and became a technician. However, when in 1852 his brother returned from a concert tour completely exhausted, Josef needed to step in as conductor of the Strauss orchestra the following year. He composed his first waltz, believing it would be his last. Nevertheless, as his brother Johann travelled abroad more and more frequently, Josef needed to substitute for him in Vienna. At the same time, he took violin lessons, learned to compose properly and thus became a musician as well. As a composer he was certainly on par with his older brother. His dances often display a certain wistfulness and sometimes seem to come straight from Schubert.
This CD unites compositions of all three sons of the Strauss dynasty‘s founder.