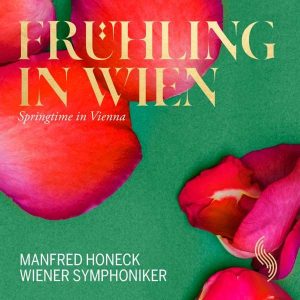 For more than 40 years the Wiener Symphoniker’s traditional Springtime in Vienna concert has been one of the great highlights of the Austrian capital’s musical calendar. Broadcast on live TV, featuring renowned conductors and a bouquet of spirited melodies the orchestra has thus driven out the winter and rang in the arrival of the new season.
For the first time ever the 2016 edition, conducted by one of Austria’s greatest present day conductors, Manfred Honeck, has been recorded and will be released on CD worldwide on 6 January 2017. The CD contains a colourful programme, including the Third Movement from Beethoven’s Pastoral as well as special “delicacies” from Max Schönherr, Carl Michael Ziehrer and excerpts from Richard Strauss’ rarely performed ballet “Schlagobers” (Whipped Cream).

This new release will be the 11th on the orchestra’s own label and the second they recorded with Manfred Honeck after a critically acclaimed album with favourites from the Strauss-Dynasty. The label’s catalogue also includes historical recordings from the orchestra’s archives with Sergiu Celibidache, Carlos Kleiber and Carlo Maria Giulini as well as new recordings with Philippe Jordan, Fabio Luisi, Lahav Shani amongst others.