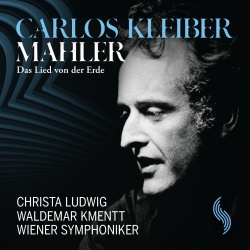 This recording bears witness to Carlos Kleiber’s sole encounter with Gustav Mahler. Prior to this, he had never conducted a work by the composer, and he would never do so again. Given how extremely selective he was in his choice of repertoire, this was certainly an exceptional case. The only work by Wagner that he had ever studied was Tristan und Isolde, for example, yet he conducted it quite a few times in Stuttgart (1969), as well as Vienna (1973), Bayreuth (1974 – 76), and Milan (1978). But he had not yet achieved this [elite] status in 1967. Within the context of the Mahler Festival, he therefore had to bow to the pressures of what was, by his standards as presented above, an extremely short rehearsal period for Das Lied von der Erde. He faced the almost insurmountable challenge of relieving a standard piece of its merely acceptable status within the space of four rehearsals. The performance was thus considered thoroughly controversial – almost a half century later, the listener may now form his own opinion of the existing recording, conscious of the basically irreconcilable differences between the original concert experience and technically generated reproductions, and taking into consideration the “zero-sum game” in which the views of former critics cancelled one another out.

Past releases of this particular Das Lied von der Erde recording have received high praise in various Kleiber internet forums. But owing to the fact that needed adjustments and final editing did not take place, these recordings were of such poor quality that knowledgeable Kleiber fans simply could not listen to them. Judging by the condition of the source material, we were working with a second or even a third generation of the original recording. In this regard, however, several traps inevitably lay in store for the person charged with remastering. This was the second important and challenging assignment for our recording engineer; it follows on the heels of Celibidache‘s rendition of Brahms, which appeared as WS 002 on the Wiener Symphoniker label. To bring new life to this historic recording, which cognoscenti considered very marginal and barely listenable, was certainly our challenge.