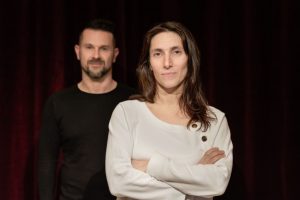 Véronique Nosbaum is a very special personality in Luxembourg vocal scenery. She is one of those naturally involved in many kind of art creation – contemporary art , theatre, literature, singing. A graduate in Modern French Literature from the Sorbonne, the Luxembourg soprano studied singing with Greta de Reyghere in Liège before taking classes with Monique Zanetti, Mireille Kayser and Hubert Weller, as well as masterclasses with Sylvia Geszty, Klesie Kelly and Norman Shetler. After a scholarship at the Pisa Opera House she assumed solo roles in operas of Gluck, Mozart and Purcell in Pisa, Lucca and Liège, and in contemporary productions at the Grand Théâtre de Luxembourg, where she is a regular collaborator. Véronique Nosbaum, whose repertoire focuses on ancient and contemporary music, performs at festivals and in concert halls throughout Europe. A skilled singer-actress, she is also frequently asked to work with theatre companies.

Romain Nosbaum is an individualist among the pianists of his generation. Without airs and graces, but with modesty and passionate devotion, he is solely focused on music. Both the grand gesture and sheer brilliancy are not his main focus – instead, his playing stands out through intelligence, subtle individuality and technical perfection.
A universal interest in ‘tradition and innovation’ expresses itself not only soloistically, but also through his activities as a passionate chamber musician. Thus, he regularly performs as a accompanist with vocal artists such as his sister Véronique.
Musicality was literally put into the cradle of Swiss-born Nosbaum. His grandmother, who was also a pianist, met artists such as Alfred Cortot or Clara Haskil and performed under the direction of Felix Weingartner. Nosbaum started to play the piano at the age of 7 and completed his studies at the conservatories of the City of Luxembourg and Metz. Advanced studies led him to the City of Basel Music Academy, the conservatory of Bern, and to the Mozarteum University of Salzburg.
In recitals, as a soloist as well as a chamber musician, Nosbaum’s concerts have led him throughout Europe and Russia to East Asia. His solo recordings have received critical acclaim and were especially praised for both the personal interpretation of the romantic repertoire and his sense for contemporary music and the varied shaping of it. After two self-published solo albums (2010/2014), he recorded the integral piano works of the composer Albena Petrovic for the label GEGA new in 2016. In 2017 he released his solo CD Encores under the label ARS Production. 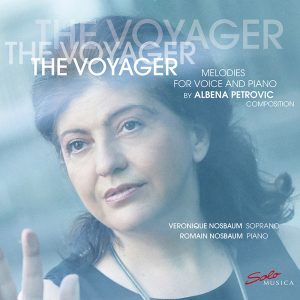