The Swiss soprano Estelle Poscio studied at the Zurich University of the Arts with Prof. Jane Thorner-Mengedoth. In 2013 she sang in the Young Singers Project at the Salzburg Festival. 2014-2016 she was a member of the International Opera Studio at the Zūrich Opera House. Some of her successes were Mme Herz in Mozart’s acting director under Maestro Theodor Guschlbauer and the world premiere of L’Ombre de Venceslao, directed by Jorge Lavelli, on the major French stages Capitole de Toulouse and Grand Avignon and others – the magazine Diapason enthusiastically describes their interpretation as “irrésistible” – irresistible.

The Swiss baritone Äneas Humm completed his vocal studies at the Juilliard School in New York in 2019. Previously, he studied at the Bremen University of the Arts with Krisztina Laki. He has been a member of the Weimar National Theater since the 2019/2020 season. He has already made a name for himself as a concert singer and has also sung in the KKL Luzern and recently e.g. Bach’s MATTHÄUSPASSION under Peter Dijkstra. From December 2019, the CHRISTMAS ORATORIUM in the Tonhalle Zurich and Winterthur follow. Aeneas Humm sings regularly with the Bremen Philharmonic, the Musikkollegium Winterthur, the Deutsche Kammerphilharmonie, the Argovia Philharmonic, the Liechtenstein Symphony Orchestra, or the baroque ensemble “Arp Schnittger”. He is also particularly successful as a song singer, including international festivals; he has also sung in Carnegie Hall / Weill Recital Hall and Alice Tully Hall in New York. Since May 2018 he has also been giving recitals with the well-known songwriter Hartmut Hoell. His first CD “AWAKENING” was launched in 2017.

The Bernese tenor with Vaudi roots Remy Burnens studied with Peter Brechbühler in Lucerne and Malcolm Walker in Paris. After completing her studies, her first opera engagements followed in Switzerland and Germany. He was able to establish himself with roles such as Belmonte in Mozart’s abduction from the Seraglio, Ferrando in Mozart’s Così fan tutte or Tonio in Donizetti’s La Fille du Régiment. He also appears as a sought-after concert singer all over Switzerland. He maintains a wide repertoire and succeeds as an evangelist and as a soloist in works from Handel to Britten. Remy Burnens is intensely devoted to Lied singing and regularly arranges Lieder evenings. In addition to focussing on German and French songwriting, his passion is for the little-known English songs of the early 20th century. He was a finalist in the 9th Cesti Competition for Baroque Opera and winner of various study and promotional prizes (Migros Culture Percentage, Friedl Wald Foundation and others).
www.remyburnens.com

Judit Polgar, born in Budapest, completed her studies at the music academies in Zurich (teaching, concert diploma, master song accompaniment) and Bern (DAS orchestral conducting) and at the University of Lucerne (master cultural studies). She has won various competitions (including the Nico Kaufmann Prize from the Canton of Zurich, companion prize at the Joseph Suder Lied Competition in Nuremberg). Judit Polgar is a much sought-after song accompanist and has been heard at various international festivals and opera houses. Various CD recordings document her artistic work. Since 2014 she has been a lecturer in accompaniment with a focus on singing at the Kalaidos University of Music in Zurich.
http://www.juditpolgar.ch/

Jakob Pilgram studied singing with Hans-Jürg Rickenbacher and Werner Güra with a focus on pedagogy and performance. In addition, he delved into choir direction. He is a sought-after soloist at home and abroad and has worked with well-known conductors such as P. Herreweghe, T. Hengelbrock, T. Koopman, H.-C. Rademann, A. Marcon and many more. He is also a member of several professional vocal formations such as the Balthasar Neumann Choir and others and has headed the award-winning, professional Basel larynx│ vocal ensemble since 2006. As a guest he was on the stages of  Basel, Bern and Lucerne theaters. He is particularly interested in the Lied. He has been a Lied duo with the pianist Mischa Sutter for more than 10 years, which has been awarded several prizes. He is a lecturer at the Kalaidos University of Music.
www.jakobpilgram.ch

The Basel-based larynx Vokalensemble, founded in 2005, consists of young, professionally trained singers and specializes in the chamber music interpretation of little-known, but musically significant and demanding vocal works. This combination of musical trouvailles and treasures on the one hand, as well as an unmistakably homogeneous ensemble sound and virtuoso individual voices on the other, touches and convinces audiences and experts alike. For its “innovative approach and its professional quality and excellence”, the larynx Vocal Ensemble was awarded the Culture Promotion Prize of the Canton of Basel-Landschaft in 2012. 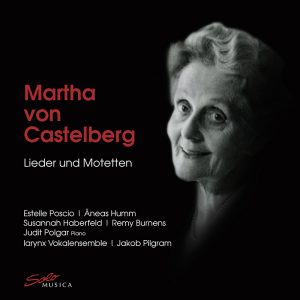