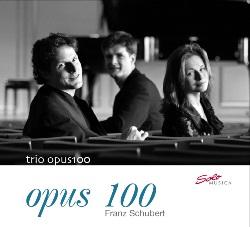 More than the monumental length of Schubert’s OPUS 100 has made the work not only a highlight in the history of music but also as the apogee of the piano trio genre. Getting to grips with this work may feel likeplanning an ascent of Mount Everest. But for a recently established ensemble to undertake this work for their first CD recording is like actually making the ascent of Everest itself. And we are also going without our oxygen supply, having taken the audacious decision to ignore the usual cuts the composer authorised and to play all the repeats in full, in an effort to savour Schubert’s proverbial “heavenly length” all the more. The recording of Schubert’s “small” piano sonata in A major op. 120 was made nearly ten years earlier, in June 2001. Like the E flat major trio, this work is not dependent on dialectically confined contrasts of mood or detailed motivic work. Its themes are not polar opposites but rather recurrences of the same idea. It is this kind of expressive ambiguity that makes Schubert a real romanticist and distinguishes him from the classically bipolar thinking of Beethoven.