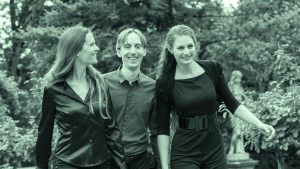 Ever since it was founded, the Swiss chamber ensemble Trio Fontane has consisted of Andrea Wiesli (piano), Noëlle Grüebler (violin) and Jonas Kreienbühl (cello). The trio was formed in 2002 and received instruction from Ulrich Koella and Stephan Goerner (Carmina Quartet) at the Musikhochschule in Zurich. The ensemble was judged the best piano trio at the 2007 Migros Culture Percentage chamber music competition and accepted into the “Young Musicians” artist exchange. The three performers received further support from the Thiébaud-Frey Foundation, the Hans Schaeuble Foundation and the International Herzogenberg Society.

The Trio Fontane has since engaged widely and successfully in concert activities. Among its highlights were its appearances in the Zurich Tonhalle, in the Alte Aula of Heidelberg University, in the Marble Hall of Schloss Elisabethenburg in Meiningen, at the festivals of Gstaad, Braunwald, Flims and Arosa and at the International Lake Constance Festival, the Journées Mozart Lausanne, at the Lenzburgiade and as part of the Sion Schubertiade. The three musicians have already captured the hearts of numerous audiences with their thrilling interpretation of Beethoven’s Triple Concerto.

Frequent broadcast transmissions and several CD recordings document the artistic achievement of the trio. Trio Fontane marked their 10th anniversary with the 2012 release on the Guild label of an album acclaimed by International Record Review as “immensely impressive” with works by Beethoven, Smetana and Schaeuble. The highly praised first recording of the chamber music of Robert Radecke was released in 2016 by cpo and received this tribute from Fanfare Magazine in 2017: “No composer, living or dead, could ever hope for his music to be played with greater empathy, emotional sincerity, and tonal beauty than it is here.”

Trio Fontane celebrated the 2017 centenary of the Zurich Central Library with the premiere of Carl Rütti’s Trio über ein Zürichsee-Lied. The ensemble simultaneously presented the double CD Zürich klingt with further gems discovered among the library’s collections. As the Schweizer Musikzeitung wrote in 2017: “Should there be any need for proof that inspiring music has been written in Zurich in the past two hundred years – here it is!”

Alongside their commitment to forgotten composers, the members of Trio Fontane are enthusiastic advocates of unusual crossover projects like that with dulcimer virtuoso Nicolas Senn. The name of the ensemble evolved from the idea of being “Tre Fontane”, three springs of effervescent musical ideas. 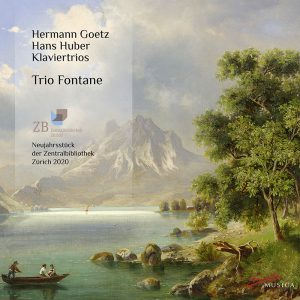