Thomas Ragossnig is one of the most distinguished Austrian harpsichordists of his generation. He was born in Vienna and grew up in Basel. He encountered early music in the family home at an early age and began harpsichord tuition when he was eight. He later studied with Jörg Ewald Dähler at the Conservatory of Berne and with Jean Goverts and Rolf Junghanns (harpsichord) at the Schola Cantorum Basiliensis, thus acquiring knowledge of true-to-style early music interpretation and performance practice. He attained the early music diploma at the Schola Cantorum Basiliensis in 1984. He went on to study with Jesper Christensen, Kenneth Gilbert, Gustav Leonhardt and Johann Sonnleitner.

Both as soloist and chamber musician, he has performed and made radio recordings in many European countries, in the USA and Mexico and at major international music festivals like the Ambras Palace Concerts, the International Lake Constance Festival, the Carinthian Summer, the Engadin Festival, the Halle Bach Festival and the Ludwigsburg Palace Festival. He holds annual harpsichord summer courses within the framework of the Arosa Masterclasses.

His rich experience in chamber music has resulted from his collaboration with renowned musicians, ensembles like the Linde Consort, the London Baroque, Les Nations and orchestras like the Chamber Orchestra of Europe under Claudio Abbado and Yehudi Menuhin.

He has made several recordings as chamber musician and soloist. His CD “Virtuosic Variations” (Bayer Records) was enthusiastically received by the press. Thomas Ragossnig is the initiator and for more than 25 years artistic director of the concert series “CIS – Cembalomusik in der Stadt Basel”, where the world’s leading harpsichordists can be heard alongside young hopefuls. 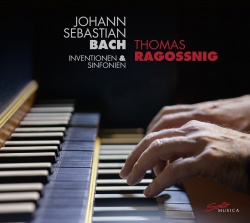