Sonja Leutwyler was born in Zurich. She studied viola and singing at the Zurich College of the Arts and the Munich College of Music and Drama with Maria de Francesca-Cavazza, Christian Gerhaher and Helmut Deutsch. While still studying, she sang roles including Sesto, Larina and Dorabella at such venues as the Prinzregententheater of Munich.

She was engaged as a soloist for four years at the Staatstheater am Gärtnerplatz in Munich, where she sang major roles for her voice type. Further engagements have taken her to the Margravial Opera House of Bayreuth, the Cuvilliés Theatre in Munich, the TeatroComunale di Bologna and the Zurich Opera House. She recently sang a lead role in the opera Kein Licht (no light) by Philippe Manoury staged by l’Opéra-Comique in Paris and has made guest appearances at the National Theatre of Zagreb and the Grand Théâtre de Luxembourg.

As a concert soloist, Sonja Leutwyler performs with renowned orchestras including the Bamberg Symphony Orchestra, the Munich Radio Orchestra under Ulf Schirmer, the Arctic Philharmonic Orchestra, the Zurich Chamber Orchestra, the Stuttgart Chamber Orchestra and the SWR Symphony Orchestra under Helmuth Rilling. She is a popular guest at major festivals including the Richard Strauss Festival of Garmisch-Partenkirchen, the Festival of Mecklenburg-West Pomerania, the Beethoven Festival of Bonn, the Stuttgart Music Festival and the St Martin-in-the-Fields concert series in London. She also regularly appears at the Zurich Tonhalle and the Vienna Konzerthaus.

Being a versatile singer, Sonja Leutwyler is much sought after for her performances of contemporary works. At the Prinzregententheater in Munich, she portrayed a lead role in Elliott Carter’s opera What Next?with the Munich Radio Orchestra. She appeared as the soloist in the opening concert of the “Wien Modern” series with the Vienna Radio Symphony Orchestra and she performed works by Luigi Nono on a tour of Italy under the baton of Roberto Abbado. She recently enjoyed great success in performances of Berio’s Folk Songs in numerous Swiss concert halls.

Highlights of the last three years include Mendelssohn’s Walpurgis Night at the Rheingau Music Festival with the Frankfurt Radio Symphony Orchestraunder Andrés Orozco-Estrada, concerts and CD recordings with the Vienna Radio Symphony Orchestra at the Vienna Konzerthaus, a solo recital of arias by Haydn and Vivaldi with Camerata Zurich at the Zurich Tonhalle, CPE Bach’s Magnificat with the Zurich Chamber Orchestra under the baton of Diego Fasolis and a song recital at Tonhalle Maag in Zurich.

Astrid Leutwyler is an artist of our times: an inspirational, charismatic violinist, competent orchestral player and chamber musician. Her musical interests are very wide-ranging.
From 2007 till 2011, she was deputy leader and a section leader of the Gustav Mahler Youth Orchestra and, on several occasions in 2011, she led the Bamberg Symphony Orchestra. From 2009 till 2014, Astrid Leutwyler played first violin in Orchestra Mozart Bologna under the baton of Claudio Abbado. For the 2014/15 season, she was appointed deputy section leader in Düsseldorf and played in the Düsseldorf Symphony Orchestra and the Deutsche Oper am Rhein. Further invitations have led her to the Munich Chamber Orchestra, Mahler Chamber Orchestra and Lucerne Festival Orchestra.
Nowadays, Astrid Leutwyler regularly plays in the Tonhalle Orchestra of Zurich, the Zurich Chamber Orchestra and the Bavarian Radio Symphony Orchestra of Munich.
She won the coveted Küsnacht Arts Prize in 2009 and was a prizewinner in the ORPHEUS Swiss Chamber Music Competition and the Schwerin International Competition of Ostracised Music.
As a chamber musician she has performed in Switzerland and abroad at such venues as the Zurich Tonhalle, the Lucerne Culture and Convention Centre (KKL), the MarianischerSaal in Lucerne, Kultur Casino Bern and St Martin-in-the-Fields in London. Astrid Leutwyler has appeared as a guest at major festivals including the Lucerne Festival, the Salzburg Festival, Settimana Musicale in Siena, Bolzano Festival Bozen, the Max Reger Festival in Weiden and the Aigues-VivesenMusiques festival in southern France.
Astrid Leutwyler has made live concert recordings for German and Swiss radio stations. She also appeared as a violinist in Amos Gitaï’s film Lullaby to my Father.
Born in Zurich in 1984, she completed her Master of Arts in Performance and Music Pedagogy and her advanced studies in Stuttgart, Zurich and London with Hanna Weinmeister, Judith Ingolfsson, Andreas Janke and David Takeno. She has received valuable inspiration from Rachel Podger and Giuliano Carmignola. She has also studied with the Belcea Quartet and the Vogler Quartet.
Astrid Leutwyler is enthusiastically involved in the promotion of the arts and founded the Orchestra of Europe in 2011. She has successfully directed her own series of concerts, titled Klassikfestival Küsnacht, since 2017. 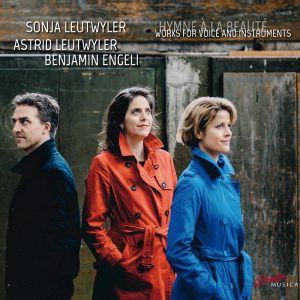