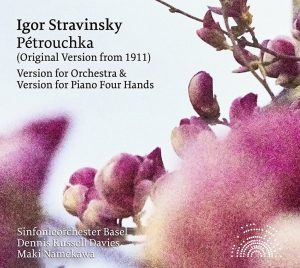 <Pétrouchka> is the last CD of the Stravinsky trilogy of the Sinfonieorchester Basel under its principal conductor Dennis Russell Davies. Thus, the orchestra has recorded all three major ballets by Igor Stravinsky – each in a version for orchestra and for piano duet.

Originally planned as a Piano Concerto, Stravinsky rewrote the music about the Russian carnival figure Petrushka into a ballet, following an idea of ballet impresario Sergei Diaghilev. When the oevre was performed on 13 June 1911 at the Théâtre du Châtelet, it was almost unanimously hailed as a fascinating synthesis of the art of music, dance and painting, and a milestone in the development of a genuinely modern ballet. Parallel to the orchestra score Stravinsky created a piano version; primarily used for studies and rehearsals. Recently, however, also the four-hand piano version gained increasing popularity in the concert hall.