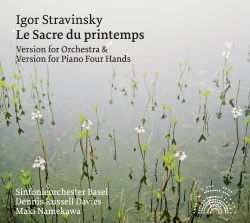 Version for Orchestra with Sinfonieorchester Basel
Version for Piano Four Hands performed by Dennis Russell Davies & Maki Namekawa
As early as spring 1910 Igor Stravinsky had a vision of a “great pagan festival” the climax of which would be the death of a young girl who dies of exhaustion after a frenzied dance, surrounded by the elders of her tribe. A further eighteen months would elapse however, during which Stravinsky consulted with the archaeologist and painter Nikolai Roerich to produce several versions of a libretto, before the composer set about realizing his vision by writing the score for this, his most famous ballet. Initially, the score bore the working title The great sacrifice, but was then renamed The Rite of Spring, and marked the international career breakthrough for the composer, not yet 32 years old, following his two earlier ballets for Sergei Diaghilev and his Ballets Russes, Firebird and Petrushka. And it has to be said that that breakthrough came with a mighty drumroll: when Le Sacre was premiered on May 29, 1913 at the Théâtre des Champs-Elysées, choreographed by the young Vaslav Nijinsky and under the musical direction of Pierre Monteux, the ballet caused one of the greatest scandals in the history of music and theatre ever – though it has to be said that Nijinsky’s choreography, with its stamping, twitching body movements that seem to truly mock the ideal of weightless grace normally expected in dance, was at least as much to blame as Stravinsky’s music. That said, this was not a performance suited to those of a nervous disposition, since the composer had transformed the orchestra to a great extent into a gasping, snorting, and above all hammering monster producing a sound that bore no resemblance whatsoever to the elegance of traditional ballet music.