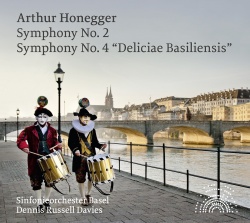 This is the fourth production on the in 2012 established in-house label of the Sinfonieorchester Basel. The label is maintained worldwide by Solo Musica.

The Sinfonieorchester Basel is one of the oldest and most important orchestras in Switzerland. It is strongly rooted in the north-west of Switzerland and at the same time enjoys a more than regional as well as international radiance. The Sinfonieorchester Basel is always again demonstrating anew its excellent quality, whether it be in its own concert tiers, in the Theater Basel or in guest concerts at home or abroad. Since 2009, the principal conductor has been the renowned American conductor and pianist, Dennis Russell Davies.

Honegger finally completed his Second Symphony in December 1941
and sent it to Sacher. Sacher then performed it for the first time on May 18, 1942, nowwith his second orchestra, the Collegium Musicum in Zurich.

.„Deliciae Basilienses“ – „I have written this fourth, and probably last, symphony for my friend Paul Sacher for the twentieth anniversary of the founding of the Basle Chamber Orchestra. Although this ‘Symphonie liturgique’ follows the tradition of Beethoven, in that its content is as much dramatic as emotional, it has greater claims, so far as its form and spirit are concerned, to the style of Haydn or Mozart.