Sinfonieorchester Basel – Arthur Honegger – Symphony No. 3 “Liturgique” and No. 1 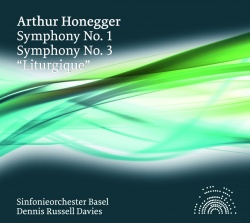 Title: Arthur Honegger – Symphony No. 3 “Liturgique” and No. 1

This is the second of two productions on the just established in-house label of the Sinfonieorchester Basel. The label is maintained worldwide by Solo Musica.

The Basel Symphony Orchestra (Sinfonieorchester Basel) is one of Switzerland’s major orchestras and appears both in concert and at the opera house. For decades it has produced a wide array of highlights under the batons of such conductors as Felix Weingartner, Hans Münch, Moshe Atzmon, Matthias Bamert, Gary Bertini, Pierre Boulez, Armin Jordan, Nello Santi, Mario Venzago and Walter Weller. Its CD recordings of the music of Robert Schumann, Maurice Ravel, Klaus Huber, Luigi Nono and Othmar Schoeck have received great international acclaim and many awards. ‘A Different Schumann’, for example, was awarded the Golden Tuning Fork from the German music industry.

Today the Basel Symphony Orchestra numbers among Switzerland’s
leading musical ensembles, with some 100 highly qualified and highly
motivated musicians. Its broad repertoire ranges effortlessly from the
Viennese classics and to contemporary music. Whether in the concert hall or the opera house, at home or on its domestic and foreign tours, this internationally varied group of musicians constantly demonstrates ist unique flexibility and artistic prowess.

One of the orchestra’s wishes came true in the 2009-10 season when ist leadership was taken over by the renowned American conductor and pianist Dennis Russell Davies.