Sinfonieorchester Basel – Franz Schubert – Symphony No.2 and No. 6 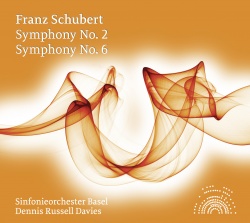 Title: Franz Schubert – Symphony No.2 and No. 6

This CD isafter theSymphonies No. 3, 5 and 8, the third release of theBasel Symphony Orchestra’s Schubert series of  all of its symphonies.
Schubert’s symphonies were designed for a ‘big audience’, but during his lifetime they were, at best, only performed in the semi-public rooms of the Seminary and those of the amateur orchestra. It was not until barely a month after his death that the first truly representative performance took place through the Society of Friends of Music (Gesellschaft der Musikfreunde) in Vienna. Leopold von Sonnleithner, a friend of Schubert’s, had some input into the programming and suggested the sixth symphony for the occasion. The “Great” C major could not be considered owing to practical constraints, but why was it number six in particular that was chosen out of his early symphonies? Were the reasons purely mundane – or was there a deeper rationale behind this decision? It would be good to know the answer, but today one can merely speculate.

The Sinfonieorchester Basel is one of the oldest and most important orchestras in Switzerland. It is strongly rooted in the north-west of Switzerland and at the same time enjoys a more than regional as well as international radiance. The Sinfonieorchester Basel is always again demonstrating anew its excellent quality, whether it be in its own concert tiers, in the Theater Basel or in guest concerts at home or abroad. Since 2009, the principal conductor has been the renowned American conductor and pianist, Dennis Russell Davies.