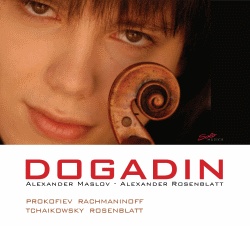 In 1988 Sergey Dogadin was born in St.Petersburg into a family of musicians. At the young age of 12 he already won well-known prizes in St. Petersburg and Paris. Sergey Dogadin is supported by the ministry for culture of the Russian federation and is awardee of the foundations ‚New Names’, the ‚C. Orbelian International Culture Exchange Foundation’ and the ‚Temirkanov Foundation’. The young artist has already acquired a vast experience of concert activities. He has toured in the USA, in Germany, Holland, England, France, Italy, Estonia, Lithuania, Hungary, Turkey and in Switzerland. The titles Pjotr Iljitsch Tschaikowsky gives these three recorded compositions for violin and piano are actually a description of their contents. All three works originally were designed for violin and orchestra, but seem to convince more in their unadorned form for two.

As with Tschaikowsky’s Mélodie, Sergej Rachmaninow’s Vocalise op. 34 Nr. 14 is also a type of instrumental song. However, in contrast to Tschaikowsky, Rachmaninow actually did compose it to be sung. David Oistrach, who the Violin Sonata Nr. 1 f-minor is dedicated to, is enthusiastic about it. Sergej Prokofjew played it to him the first time in the summer of 1946. The Russian composer and pianist Alexander Rosenblatt (*1956) finds his inspiration in romantic themes and melodies and then distorts the original sound material with the musical means of the 20th century, jazz sounds and unusual rhythms. The originally performed opera Carmen by Georges Bizet in 1875 was the inspiration for the Carmen Phantasy written in 1994 for the clarinettist Anton Dressler. There is a version for clarinet, one for flute and alto-saxophone – with piano accompaniment in both cases – as well as a version for two pianos. In 2002 a version for violin and piano was created, allowing the performer to prove all his virtuous mastery.