Born in Duisburg in 1946, Rolf Koenen studied with Detlef Kraus (Folkwangschule, Essen), Ludwig Hoffmann (Munich) and Maria Tipo (Florence). The beneficiary of a scholarship from the Studienstiftung des deutschen Volkes throughout his studies, he also won the Folkwang Award in 1969 and began teaching at the Munich Musikhochschule immediately after completing his studies in 1973. He was appointed professor of piano at the Hochschule der Künste in Berlin in 1982. In 1971 he initiated his permanent duo partnership with Hansjörg Schellenberger, the present solo oboist of the Berlin Philharmonic Orchestra. He was Schellenberger’s accompanist when the oboist won the ARD Competition in 1972.

Koenen’s first recording for Deutsche Grammophon in 1973 was followed by a number of others for DG, Denon and Sony. From 1974 to 1980, he was forced to interrupt his budding career, because of illness and an operation on his right arm. He began concertizing again regularly in 1980 as a soloist (also with orchestra) and, above all, as a chamber musician.

Among his partners are Aurèle Nicolet, Irena Grafenauer, Radovan Vlatkovic, Rainer Kussmaul, Georg Faust, Wolfgang Schulz (solo flutist of the Vienna Philharmonic), Gottfried Schneider and Claes H. Ahnsjö. Koenen has performed at such venues as the Chamber Music Hall of the Berlin Philharmonie as well as in a number of other German cities, in Japan (two tours), Austria, Italy, Sweden and Norway. Since 1989 he has been invited every year to give summer classes in Siena and to hold master classes with Hansjörg Schellenberger at the Amici della Musica in Florence. Koenen has also taught in Oslo and Stockholm. 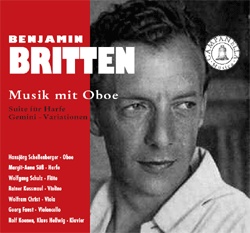