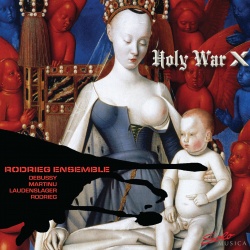 Solo Musica presents the Rodrieg Ensemble on an album that explores the dawn of modern classical music and its continuing legacy – with three late works of Claude Debussy as the point of departure.  The album begins with Syrinx 2 (Mark Rodrieg’s flute-duo arrangement of Debussy’s original work for solo flute), Feux d’artifice (Fireworks – Debussy’s last piano Prelude) and Debussy’s Sonata for Cello and Piano.  The album then explores the ongoing influence of the early modern period by presenting Bohuslav Martinu’s Trio for Flute, Cello and Piano, Harold Laudenslager’s Evocation for Solo Flute and finally Mark Rodrieg’s 2011 triptychHoly War X, which is performed by the Rodrieg Ensemble and guest artists, including the Intercontemporain Quartet and female singers from Egypt, Italy, and Japan.  The first two works of the Holy War X triptych (Jihad and Bacio), blur the lines between classical music and popular music by utilizing various elements that are either taken from or associated with popular music.  In the final work, however (Syrinx 21), Mark Rodrieg abandons the hybrid form, by among other things, abandoning the most common “safety net” element found in most popular music (repetitive percussion), and presents a work as pure art music that incorporates compositional elements from multiple periods, including quotations from Debussy’s Syrinx.

The Paris based Rodrieg Ensemble was established by three award-winning artists in order to explore the relationship between contemporary classical music and established repertoire through reference performances of thematically selected chamber music.  Although part of the Rodrieg Ensemble’s artistic vision is to expand the range and context of its core flute/cello/piano trio, its repertoire is not limited to or even predominantly based upon this configuration.  Rather, the Rodrieg Ensemble pursues programming projects in which repertoire selections are made in order to effectively elucidate a given idea or theme.  Thus, performances include works for solo, duo, trio and larger ensemble with guest artists.  This album, which could be succinctly described as ‘Debussy and After,’ is a perfect example of the Rodrieg Ensemble’s multi-faceted artistic vision.