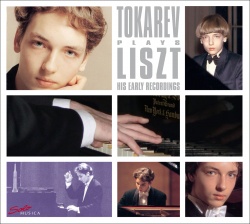 For some years now, the world of music has been marvelling at the technical skill of pianists who are dubbed a “Wunderkind” in early life, and presented as such on the international stage. Today’s star pianists like Mikhail Pletnev, Boris Berezovsky, Nikolai Lugansky, Arkadi Volodos and Lang Lang were all acknowledged to have outstanding talent at the age of about 16 to 18.

Looking back at the precision and dedication of the young Nikolai (Kolya) Tokarev when he was performing concerts at 14 or 15, we can only rejoice and marvel at his virtuosity!

Even in his early teens, the young Kolya Tokarev would play recitals featuring Liszt’s Etudes d’exécution transcendante (all12 of them!), transcriptions of operas like Rigoletto, Tannhäuser and Reminiscenses de Don Juan, as well as the Grandes Etudes de Paganini, the concert study Waldesrauschen and the Mephisto Waltz No. 1

To expect a thirteen-year-old pianist to perform this repertoire in public would be utterly unrealistic without an absolutely fantastic, one could almost say unique technical and musical grounding. His grandfather was and his father still is an outstanding concert pianist, his grandmother was a violinist, and his mother is an exceptional cellist. Yet what would such talent have been worth had it not been for his attendance at one of the best piano schools in the world – in his native Russia.

The present recordings of the 13- and 14-year-old Nikolai Tokarev, made for his first concert tours to Japan in 1997/1998 and 2000, demonstrate his talent in a most impressive manner.