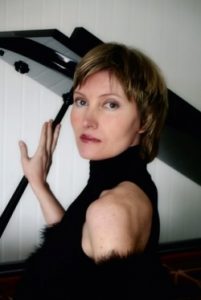 The Russian pianist delights audiences in the concert halls of Russia, Spain, France and Germany with her emotional approach, colourful interpretations and passion. She is a welcome guest at many international music festivals.

Natalia Nikolai was born in a small village in the Volgograd region, some 1,300 km south of Moscow. Like her virtuoso accordionist father, she also had a passion for keyboard instruments. When her father noticed that the little Natalia kept on trying to play his accordion, he decided to enable her to receive pianistic training at a music school. The family moved to the nearby town of Kotelnikovo, where Natalia graduated with distinction from the music school at the early age of twelve.

After winning the southern Russian competition for young musicians, she continued her studies at the local music college, from which she also graduated with distinction. Natalia won prizes for the best artistic presentation and virtuoso playing during that period.

In 1987 Natalia Nikolai began comprehensive studies in piano and music education with the acclaimed Prof. Evgeny Liebermann at the famous Gnesin Conservatory in Moscow, from which she graduated most successfully as a solo and chamber pianist. Natalia Nikolai then studied further with the world-famous Prof. Oleg Maisenberg at the College of Music and Performing Arts in Stuttgart in Germany. He later wrote thus: “To my mind, Natalia Nikolai is an exceptional pianist with great expressive power. She belongs in the major concert venues.”

The CD she recorded in Germany with works by Skrjabin, Rachmaninov and Liszt was praised by the recognized critic Dr. Eckhardt van den Hoogen, Pro Classics: “… this artist is itinerant, like the objects of her musical passions, so it is no wonder that in her programme selection as well as in her interpretations she betrays a degree of inner feeling that is possessed only by great pianists.”

Wilhelm Riekert, long-time friend of the world-famous pianist Wilhelm Kempff and reviewer of important pianistic events in all of Europe as music critic for the Stuttgarter Zeitung for more than thirty years, wrote: “So involved was I by the expressiveness of her performance that fine electrical charges sparked over to me; a performance in which fundamental and highly differentiated musicality fused into a perfect whole.”