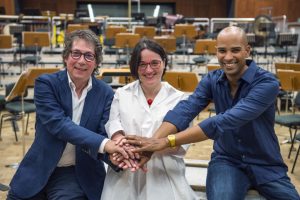 The label partnership, initially scheduled for five years, will be launched on 20 October 2017 with the release of a Schubert CD conducted by Kevin John Edusei.

“We are pleased to have found a partner in Solo Musica, with whom we can collaborate in an up-to-date arrangement on an equal footing as well as artistically self-determined,” commented Annette Josef, Intendant of the Munich Symphony Orchestra, signing the contract with Solo Musica , The collaboration is initially scheduled for five years, in which CD recordings of the Munich Symphony Orchestra are to be published in their own appearance at regular intervals. Solo Musica takes over the label management and enables the worldwide distribution of the recordings via the distributors Sony Music for Germany, Austria and Switzerland as well as Naxos in the rest of the world.

“Solo Musica is very interested in developing creative ideas in partnership. This is the only way to create individual, extraordinary recordings, such as our first publication with the Munich Symphony Orchestra – a Schubert recording. In addition, I think it is nice to work together with a sought-after Munich symphony orchestra as the Münchner Plattenlabel in addition to our internationally established artist base, “said Hubert Haas, managing partner of Solo Musica.

The first release is scheduled for October 20, 2017, for which the Schubert Symphonies Nos. 4 and 7 “The Unfinished” were included in the finished version by Mario Venzago. Kevin John Edusei, Principal Conductor of the Munich Symphony Orchestra, on the repertoire selection: “Franz Schubert is considered by my orchestra to be a composer with an essential key function. It is to be understood out of the spirit of Viennese Classicism and at the same time bridges the gap to Bruckner and Mahler or contemporary composers such as Thomas Larcher. In other words, we just have to do Schubert! “