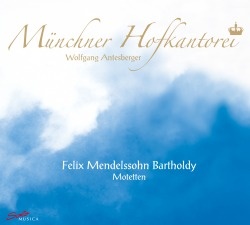 The Münchner Hofkantorei was re-established in 2009. Like their artistic director and initiator Wolfgang Antesberger, the singers are members of the chorus of the Bavarian Staatsoper.

That places the ensemble in the direct historical tradition of the original Münchner Hofkantorei, the Munich court chapel of Duke Wilhelm IV, a member of the house of Wittelsbach. Then as now, the singers from various nationalities are selected according to the choral and solo demands of the music being performed. Today’s Münchner Hofkantorei is a modern vocal ensemble which performs a cappella or together with accompanying instruments, according to the demands of each work. Its proximity to the Bavarian Staatsoper means that the Münchner Hofkantorei regularly takes part in its events, adding ambitious choral literature to its repertoire. In addition to seldom heard works of the Renaissance, its programmes embrace choral compositions of the Baroque, Romantic and modern periods.

Sacred music was increasingly drawn into the wake of Romantic music aesthetics at the beginning of the nineteenth century. Due to its lack of concrete meaning, music seemed no longer subordinate to language; on the contrary, being the art most suited to producing an “intimation of endlessness”, of namelessness, music was acquiring the aura of religion. Felix Mendelssohn-Bartholdy grew up in that period of upheaval. Mendelssohn did not imitate style for its own sake. He proved his craftsmanship and historical flair as master of the most varied compositional techniques and traditions. Above all, however, he succeeded in setting the traditional techniques of motet style within frameworks or in placing accents which accorded with the harmony and syntactic musical language of his time.