Mischa Greull – From Beethoven to Present 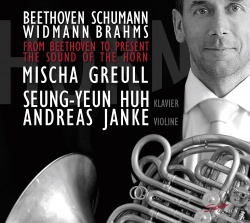 Title: From Beethoven to Present

Horn sounds from Beethoven to the present

The horn player Mischa Greull is a versatile chamber musician, soloist and teacher. In addition to his worldwide concert activities, Mischa Greull is a professor at the Zurich University of the Arts. He connects with Brahms deeply. During his childhood, the Brahmshaus in Rüschlikon on Lake Zurich was the residence of his grandparents. Beethoven stands for sound transparency, while Schumann’s Opus 70 is dedicated to sound fusion. Jörg Widmann is, in comparision to the three old masters, Greull’s latest discovery.

Seung-Yeun Huh, born in Seoul, Korea, is one of the leading pianists of her country, a trained cultural manager and vice-rector at the Conservatory of Music in Zurich. Numerous concerts as a soloist with renowned conductors and orchestras have led her into numerous international concert halls.

Andreas Janke, the first concertmaster of the Zurich Tonhalle Orchestra, began an active international concert activity early on. Since 2013 he has also been Professor of Violin at the Zurich University of the Arts. Andreas Janke plays a violin by Carlo Bergonzi “Hozier, Andrews” 1733-39.