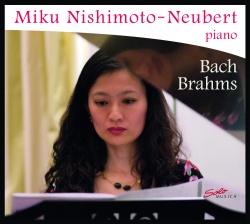 J. S. Bach’s creative potential as a composer was so all-embracing that there is hardly a single musical genre to which he did not repeatedly return. The great instrumental cycles and the monumental choral works are those most closely associated with his illustrious name. One of these cycles, the Six Partitas for Clavier solo, was designated as his opus 1. Bach wrote it at the age of 46 and had it published himself. One suspects he must have taken special care in selecting a work for the accolade of “opus 1”, especially since his catalogue of works to that date already contained many of his unique masterpieces.
Johannes Brahms’ piano works can be divided into two periods: The early, largescale piano works alternate between symphonic and song-like conception. Their suitability for the concert hall lies in the highly virtuosic writing, for instance in the Paganini Variations. Then there are the late works, the summation of an individual journey, the unifying of personal will with spiritual potential.

Miku Nishimoto-Neubert has performed widely in Europe, Japan and North America as soloist, chamber-musician and as accompanist, concentrating on the music of Bach, German Romantic composers and the modern classics. There she finds the figurative and formal clarity, which, besides the sensitive qualities of touch, characterise the playing of Miku Nishimoto-Neubert. A critic writing about her recent CD of works by Bach spoke of “a capricious sophistication of the spirit” and “a meditative introspection”. Notwithstanding all her technical proficiency, it is the intensity with which she seeks the inner spirit of the music which marks the uniqueness of her interpretations and makes them memorable experiences.