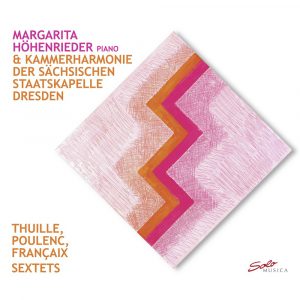 Her artistic career has led her to many of the world’s major music centers. Margarita Höhenrieder has played many concerts as soloist with conductors like Kirill Petrenko, Claudio Abbado, Lorin Maazel, James Levine, Riccardo Chailly, and Fabio Luisi, and with such orchestras as the Bavarian Radio Symphony Orchestra, the Munich Philharmonic, the New York Philharmonic, the Staatskapelle Dresden, the Gewandhaus Orchestra in Leipzig, the Salzburg Mozarteum Orchestra and the Mahler Chamber Orchestra.

She has been a friend of Harald Genzmer for many years. Among other works, he dedicated the Concerto for Piano, Trumpet and Strings to her, which she premiered together with Guy Touvron and the Württemberg Chamber Orchestra Heilbronn. Genzmer composed his last major work for Margarita Höhenrieder, “Wie ein Traum am Rande der Unendlichkeit” (“Like a Dream on the Edge of Infinity”) for piano and flute. In 2009, she played the premiere of the work with Emmanuel Pahud in Rome. (Solo Musica CD SM159)

In September 2014, she had a reunion with her former teacher Leon Fleisher as conductor in a performance of Beethoven’s Piano Concerto No. 2 at the Zollverein world heritage site in Essen.
Margarita Höhenrieder and the Bläsersolisten der Staatskapelle Dresden give regularly concerts and are producing recordings together.