Lini Gong is a soprano of Chinese heritage and a specialist in contemporary music.

She is a versatile singer. Her repertoire includes the great, challenging roles for coloratura soprano: she has for example sung Olympia in Tales of Hoffmann by Jacques Offenbach and Zerbinetta in Richard Strauss’s opera Ariadne auf Naxos at the theatres in Freiburg and Basel. Lini Gongʼs special passion is for modern and contemporary music. The singer has already collaborated with numerous composers – including Elmar Lampson and Krzysztof Penderecki, Wolfgang Rihm and Peter Ruzicka. Reporting on her embodiment of Death in Hector Paaraʼs opera Das geopferte Leben at the Munich Biennale in 2014, the newspaper Die Deutsche Bühne wrote: “Among the singers, who were consistently good, the almost dramatic coloratura soprano Lini Gong stands out in particular; she sings with captivating brilliance and has a phenomenal stage presence.”

Born in Zhuzhou, Hunan (China) in 1981, Lini Gong received  her training at the music boarding school in Wuhan, at the Shanghai Conservatory of Music and at the College of Music and Drama in Hamburg. While preparing for her concert examination she took on a permanent engagement at the theatre in Freiburg, where over eight seasons she sang many great roles of the coloratura soprano repertoire. Lini Gong has given acclaimed performances in operas by Mozart, Rossini and Verdi. Critics praise her “glass-clear soprano voice” (Südkurier). The soprano is attested as an “eminent coloratura singer” (Badische Zeitung), and as a “nimble” Mozart singer (Opernwelt). Lini Gong gave her debut at the theatre in Freiburg in György Ligetiʼs opera Le Grand Macabre delivering an “excellent performance” as Police Chief Nekrotzar (Die Welt).

Guest appearances have taken her to the opera houses in Basel, Hamburg, Kiel, Stuttgart and Weimar. Lini Gong has worked with directors such as Calixto Bieito and Vera Nemirova. She also has close ties to conductors such as Peter Rundel, Jonathan Stockhammer and Peter Tilling, Gerhard Markson and Fabrice Bollon. She has performed with numerous orchestras, including Ensemble Resonanz, ensemble recherche and the Freiburg Baroque Orchestra. She was involved in large-scale roles at premieres at the Munich Biennale and the Schwetzingen SWR Festival; these include acclaimed performances in the operas Koma by Georg Friedrich Haas and Wilde by Hector Parra. In 2017 Lini Gong gave her debut in Hamburgʼs Elbphilharmonie in a concertante performance of Arnold Schoenbergʼs opera Moses und Aron together with the NDR Elbphilharmonie orchestra under the baton of Ingo Metzmacher.

Lini Gong has won numerous prizes, including a special prize at the 2001 “Neue Stimmen” singing competition in Gütersloh. She also won second prize at the Concours International de Musique de Chambre in Lyon. In 2007 she was awarded the Berenberg arts prize in Hamburg. 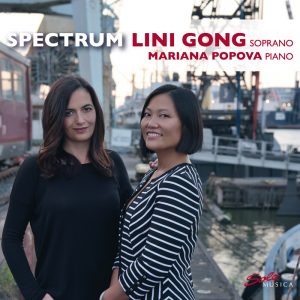