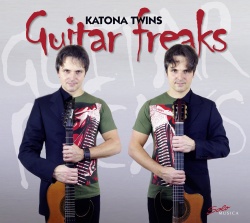 On this disk you will find our own versions of some well known pop-rock, folk and classical tunes and a couple of our own compositions. When making an instrumental arrangement of a song the challenge is that you lose the lyrics which change and are only left with the melody that is always the same. There are only a few songs such as Queen’s Bohemian Rhapsody that have enough musical material to keep an instrumental version sound interesting. That is why in most arrangements we added our own musical ideas which we hope make well known songs appear fresh and original. We like turning things upside down so don’t be surprised to hear a baroque style intro into “Sweet home Alabama” or some guitar percussion and rock-style improvisations in “Vivaldi Stormed”. (Katona Twins)