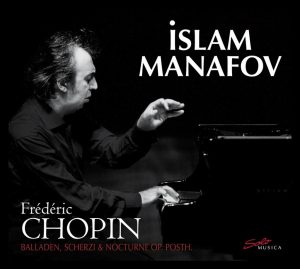 With this first album, Islam Manafov connects with his listeners through the works of the Romantic genius Chopin, with whom he has felt a close emotional tie since his childhood.

Using his immense palette of nuances he takes his listeners on a journey beyond time with Chopin’s works that may be considered his most difficult, both technically and musically, with their differing moods, at times wild, at times childish, at times rebellious and at times full of longing…”

Islam Manafov was born in Baku, the capital city of Azerbaijan, and studied at the Baku Music School during the years 1977-1981. In 1979 he won 1st prize in the “Azerbaijan Young Pianists Competition”, attracting the attention of the musical scene. Following this achievement, at the age of 17, he performed S. Rachmaninov’s Piano Concerto No.3 under the world famous Maestro Niyazi Tagizade, to great acclaim.

As a “People’s Artist” of the Republic of Azerbaijan, Manafov continues his artistic life as a pianist, conductor and composer, while working as a Professor at Baku Music Academy and Yeditepe University in Istanbul.