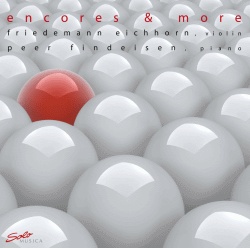 During the first part of the 20th century, short characteristic pieces, which these days are almost only performed as encores, played an important part for the violinist. Following a mostly Baroque “warm-up piece” and a well known violin sonata from the classical or romantic repertoire – sometimes a violin concerto was played alternatively with a piano accompaniment (!) – artists such as Jascha Heifetz, Fritz Kreisler or Mischa Elman arranged the second part of their recitals preferably with those charming, artistic and expressive pieces, which are characterised by a uniform, concise musical atmosphere.

This recording was made on the occasion of a 12 part concert series for violin and piano which the artists performed in the Reiss-Engelhorn-Museums in Mannheim in 1997 and 1998.

The idea was to introduce one musical cultural region at each concert. The titles of the programmes were as follow: Vienna, Bohemia and Moravia, France, Italy, Scandinavia, Hungary, Belgium, Russia, Spain, Poland, England and America. The first CD presents the Hungarian concert, the second CD combines selected works from the other programmes.