Growing up in a British-Polish family of musicians in Germany, the pianist Benjamin Mead has been studying song accompaniment and chamber music with Michael Dussek and Malcolm Martineau with Prof. Boguslaw Strobel in Düsseldorf at the Royal Academy of Music in London. He will continue his studies from autumn 2020 in the concert exam and at the same time as a fellowship at the institution of the same name. As the winner of the Brenda Webb Award for song design and the Dennis Horner Accompanist’s Prize, he quickly established himself as an expressive and sensitive song designer: He made his debut in 2020 at Wigmore Hall in London, gave chamber music evenings with the Australian violinist Bridget O’Donnell and song evenings with Dame Felicity Lott, Franziska Heinzen and Manuel Walser.
Part of his intensive chamber music work is the collaboration with the Swiss soprano Franziska Andrea Heinzen. Together, the lied duo now inspires audiences across half of Europe. In February 2021, their debut album around the French composer group Les Six will be released as a co-production with Swiss radio SRF 2 Kultur at Solo Musica.
The Swiss soprano Franziska Heinzen inspires in baroque operas up to world premieres with her unmistakable stage presence and gripping authenticity. I.a. She made her debut at the Trier Theater in 2015 as an “outstanding Mozart voice” in the role of Annio (La clemenza di Tito), which she resurrected as a substitute at the Ulm Theater. Furthermore, until 2015 she could be heard in the lyric mezzo-soprano as Ruggiero (Alcina), Idamante (Idomeneo) and Isolier (Le comte Ory).
The lied duo met in 2015 at the Robert Schumann University in Düsseldorf. In 2017 they won first prize at the 2nd Rhein-Ruhr International Lied Competition in Ratingen and second prize at the Sieghardt Rometsch Chamber Music Competition. In addition, the lied duo was awarded the 2017 Music Culture Prize by the State Capital of Düsseldorf for their artistic work.
www.benjamin-mead.com
www.franziskaheinzen.com 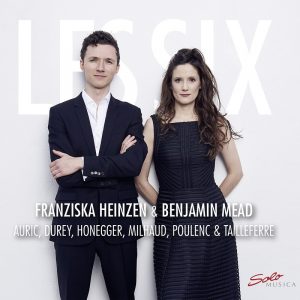