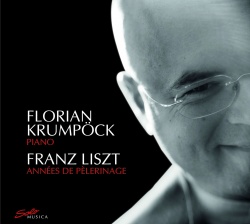 Franz Liszt was one of the most important figures in the history of nineteenth-century music. As a virtuoso, he revolutionized piano technique, introducing many ideas that vastly extended the instrument’s tonal potential. Not least in order to escape the gossip in the French capital, Liszt and his companion spent several years in Switzerland and Italy. Starting from Geneva, where he taught and performed, Liszt undertook several tours of Switzerland. He recorded his impressions in twelve piano pieces and published them as Album d’un voyageurin 1835. Then, basing himself in Rome, he travelled through Italy from 1837 to 1839 and again turned his impressions into compositions. Some twenty years later, long after his separation from the countess, Liszt published Années de Pèlerinage(years of pilgrimage), a thoroughly revised and expanded form of his musical diaries.

Born in 1978 in Vienna, the pianist and conductor Florian Krumpöck is designated General Music Director designate and Principal Conductor of the North German Philharmonic Orchestra and the municipal theatre in Rostock. He gave a highly acclaimed solo debut at the Vienna Musikverein in 2008, playing two complete cycles of 32 piano sonatas by Ludwig van Beethoven for the first time.

The German piano manufacturer Blüthner has provided him with his own concert grand for life, and the instrument accompanies him on tours and to recordings.