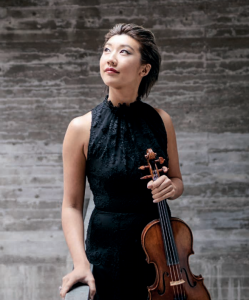 Hailed by the New York Times as “a brilliant soloist” who “played with extraordinary precision and luminosity”, violinist Fabiola Kim is one of the most dynamic players of her generation with a wide variety of repertoire from classical to contemporary music. Her recent engagements include a recording with the Munich Symphony Orchestra, premiering a piece written by Esa-Pekka Salonen for which the Strings Magazine described “played with serene purity”, concert engagements at the Aspen Music Festival, the Munich Symphony Orchestra, Nuremberg Symphony Orchestra, Berlin Symphony Orchestra and Owensboro symphony Orchestra.. After beginning her studies at the age of four, she made her concerto debut with the Seoul Philharmonic Orchestra just three years later. Ms. Kim is the winner of various awards and competitions, including the Seoul Philharmonic Orchestra’s Concerto Competition as the youngest competitor in the history of the competition to win.

She has collaborated with conductors such as Alan Gilbert, Gilbert Varga, Jane Glover, and Nicholas McGegan. Her past solo performances include engagements with the Seoul and Suwon Philharmonics; a European tour with Suwon Philharmonic Orchestra to the Bruckner Festival in Linz and Merano Festival in Merano, Italy, the Juilliard Orchestra, Aspen Philharmonia, the Kangnam, Korean, Broward, and Prime Symphony Orchestras; the Livingston Symphony; Cologne Chamber Orchestra; North Czech Philharmonic Orchestra; the American Academy of Conducting at Aspen, Orquestra Sinfonica OSUANL, the Budapest Symphony Orchestra MAV, the Hofer Sinfoniker, Korean Chamber Orchestra, Westdeutsche Sinfonia, and Colburn Orchestra.

In addition to her solo engagements, Ms. Kim has a passion for orchestral repertoire, has been featured on the radio, and plays outreach concerts. She regularly performs as concertmaster of the Colburn Orchestra, and served as concertmaster of the Juilliard Orchestra. In addition, she was concertmaster for the New York String Orchestra Seminar in 2012.  Her outreach concerts have taken her all over New York, and she has participated in a week-long residency at Juilliard in Aiken in South Carolina. Her radio appearances have been featured on NPR’s From the Top and The Young Artists Showcase on WQXR New York. An avid chamber musician, she has performed at festivals like Ravinia Steans Institute, Aspen Music Festival, Verbier Festival and La Jolla Music Society Summerfest.

Ms. Kim’s concerts have taken her all across the globe, as she has performed throughout North America, Mexico, Europe, Japan, and South Korea, performing at well known venues such as Carnegie Hall, Berlin Philharmonie, Avery Fischer and Alice Tully at Lincoln Center, the Seoul and Kumho Arts Centers, the Kimmel Center, the Church of St. Martin-in-the-Fields, and the Auditorium Conciliazione.

Ms. Kim is an Artist Diplomia recipient at the Colburn School under the guidance of Robert Lipsett, and she is a Bachelor and Master of Music recipient of Juilliard under the tutelage of Sylvia Rosenberg and Ronald Copes. Her former teachers and mentors include Kyung Wha Chung, Namyun Kim and Choongjin Chang. She is now on faculty for Community School of Performing Arts at the Colburn School.