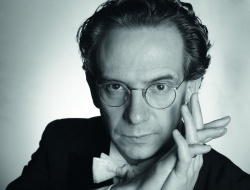 Fabio Luisi was born in Genoa in 1959 and began to play piano at the age of four. Luisi received his diploma exam in piano at the Niccoló Paganini Conservatory in Genoa in 1978. He then continued his piano studies with Antonio Bacchelli and Aldo Ciccolini in Paris. Further Luisi began conducting studies under Milan Horvat at the Musikhochschule
in Graz. Luisi received his conducting diploma with honours in 1983 and took up his first position as an opera coach and conductor at the Graz Opera that same year. In 1984, he made his conducting debut with Cimarosa’s Requiem in Martina Franca. Luisi left the Graz Opera to begin his international career in 1987. In 1989, he debuted in Il barbiere
di Siviglia at the Bayerische Staatsoper Munich, Le nozze di Figaro at the Staatsoper unter den Linden Berlin, and Tosca (which he calls his “fateful opera”) at the Wiener Staatsoper. Since making successful debuts at the aforementioned houses, he has been a regular guest conductor for repertory productions, revivals and new productions. He celebrated his American debut in 2000 with a new production of Rigoletto at Chicago’s Lyric Opera. In 2002, he debuted at the Salzburger Festspiele in a new production of Die Liebe der Danae, followed by a concertante performance of Die Ägyptische Helena that led to an ongoing collaboration with the Sächsische Staatskapelle Dresden. Luisi’s path in the symphonic realm also began in the city where he studied conducting. Th e Grazer Symphonisches Orchester was re-established under his artistic direction in 1990. The second half of the 90s was marked by career building in terms of live concerts, radio recordings
and CD projects, and three orchestras took part in these activities: In 1995, he became Artistic Director and Principal Conductor of the Tonkünstler-Orchester Niederösterreich and in 1996 Artistic Director of the Symphonieorchester des Mitteldeutschen Rundfunks in Leipzig. In 1997 Luisi was appointed Artistic and Music Director of the Orchestre de la Suisse Romande in Geneva. In February 2000, Fabio Luisi made his U.S. debut with the New York Philharmonic. Moreover, beginning in the 2007–08 season, Luisi was appointed Musical Director of the Sächsische Staatsoper Dresden and Principal Conductor of the Sächsische Staatskapelle, following in the footsteps of such figures as Fritz Busch,
Karl Böhm, Josef Keilberth, Rudolf Kempe and Giuseppe Sinopoli. Since 2005 Luisi has been Chief Conductor of the Wiener Symphoniker, beginning in the 2012–13 season, he became Music Director of the Zurich Opera. In September 2011, Luisi has also been appointed as Principal Conductor of the Metropolitan Opera in New York.