Under the direction of Conrad Steinmann, Ensemble Melpomen has committed itself to opening up the musical dimension of the Greek Classical world. In hitherto unparalleled work, it has initially based the rediscovery of Ancient Greek music primarily upon the reconstructed instruments built by Paul J. Reichlin. The association with him reflects a partnership lasting over 20 years combining research in numerous museums (Athens, Thessaloniki, Corinth, Paestum, London, Copenhagen, Berlin, Leyden, Cairo) with trials in the workshop, study in libraries and eventually performance in the concert hall. The make-up of the ensemble depends on the project in which it is engaged. It may include a kitharodes, an auletes and a chorus as in the “Olympionikais”, the victory songs of  Pindar, performed at the closing ceremony of the 2004 Olympic Games in Athens. The project “Sappho and her time” features the soprano Arianna Savall, who accompanies herself on the barbitos, and the tenor and kithara player Giovanni Cantarini, who was originally a student of classical philology. A small female choir occasionally represents Sappho’s pupils. These are joined by the strict instrumentalists, namely the percussionist Martin Lorenz and the leader of the ensemble Conrad Steinmann, who as the aulos player is also responsible for the ultimate sound of the music. The ensemble has evolved under the aegis of the Schola Cantorum Basiliensis, which has provided the necessary assistance in the form of a long-term research assignment into Greek instruments. The work of Melpomen has also benefited over many years from a scholarship of the Stavros Niarchos Foundation.

A first recording, “Melpomen, Ancient Greek Music for an Athenian Symposion of c. 450 BC”, was awarded a Diapason d’or. The ensemble’s second CD “Sappho and her time”, released by Sony, is devoted to the songs of the legendary Lesbian singer Sappho and her contemporary colleagues such as Solon and Anakreon.

New programmes include CHOROS/ΧΟΡΟΣ, featuring choral passages from various dramas by Sophokles (Oidipous Tyrannos and Antigone), and  “Odysseus” with episodes from the Odyssey of Homer. 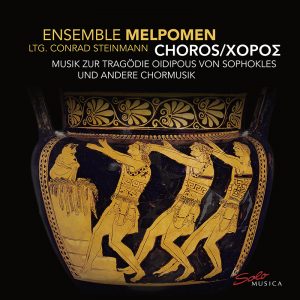