Named “Instrumentalist of the Year 1997” at the prestigious Victoires de la Musique award ceremony in Paris, the Swiss-French flutist Emmanuel Pahud is one of today’s most exciting and adventurous musicians. He was born in Geneva in January 1970 and started to study music at the age of six. He graduated in 1990 with the Premier Prix from the Conservatoire National Supérieur de Musique de Paris, after which he continued his studies with Aurele Nicolet.

He has won first prize in many major International Music Competitions like Kobe in 1989 and Duino in 1988, then won eight out of the twelve special prizes at the Concours de Genève in 1992. He took the Soloists Prize in the World-wide French-speaking Community Radio Awards, and the European Council’s Juventus Prize. He is also a laureate of the Yehudi Menuhin Foundation and of the International Tribune for Musicians of UNESCO.

At the age of 22, Emmanuel Pahud was appointed Principal Flute of the Berlin Philharmonic Orchestra under Claudio Abbado, a post to which he returned in 2002 after an 18-month sabbatical when he taught the Virtuosity Class at the Geneva Conservatoire and he has recently been voted onto the Media Vorstand of the BPO.

In 2008-09 Emmanuel performed with, amongst others, the Cincinnati Symphony, BBC National Orchestra of Wales, Mahler and Franz Liszt Chamber Orchestras as well as has recorded with the Rotterdam Symphony Orchestra and Yannick Nezet-Seguin and has given performances of the Elliot Carter Concerto with the Berlin Philharmonic Orchestra and Daniel Barenboim. He will also continue to perform three newly commissioned flute concerts by Matthias Pintscher, Michael Jarrell and Marc-André Dalbavie, all of which have been recorded for EMI.

He is a dedicated chamber musician and regularly gives recital tours with pianists such as Eric Le Sage, Yefim Bronfman and Hélène Grimaud, as well as jazzing with Jacky Terrasson. He will perform recitals with guitarist Christian Rivet and will tour with Trevor Pinnock across the United States, Japan and South East Asia and Europe playing Bach complete flute sonatas which they have recorded together for EMI.

In 1996 he signed an exclusive contract with EMI Classics, a collaboration which is set to be one of the most significant contributions to recorded flute music. The releases have received unanimous critical acclaim (“I haven’t heard a flautist on disc that I like as much as Pahud” – American Record Guide ; “surpassing any previous recordings of the Mozart quartets”- BBC Music Magazine ; “this signals the arrival of a new master flautist” – The Guardian ; “don’t miss any of Pahud’s recordings!” Diapason ), and have been showered with awards including several TV-Victoires de la Musique, Diapason d’Or, Radio France’s “Recording of the Year”, Fono-Forum and TV-Echo awards in Germany, “Record Geijutsu” and “Ongaku no Tomo” award from the Japanese record industry. 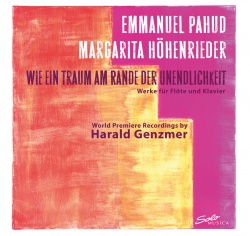