GRAMMY®-nominated, award-winning (Gold Medal at the Global Music Awards in 2017 and 2018) and a concert violinist since the age of four, Elmira Darvarova caused a sensation, becoming the first ever (and so far only) woman-concertmaster in the history of the Metropolitan Opera in New York. With the MET Orchestra she toured Europe, Japan and the United States, and was heard on the MET’s live weekly international radio broadcasts, television broadcasts and CDs for Sony, Deutsche Gramophone and EMI. As MET concertmaster she has performed with the greatest conductors of our time, including the legendary Carlos Kleiber. She studied with Yfrah Neaman, Josef Gingold and Henryk Szeryng.

She can be heard on numerous CDs (including the world premiere of Vernon Duke’s violin concerto with the ORF Vienna Radio Symphony, and a CD with music by René de Castéra, named a RECORD OF THE YEAR in 2015 by MusicWeb International). She has appeared on the stages of five continents and has performed concertos with numerous European and American orchestras. She has given master classes worldwide and has performed and recorded chamber music with Janos Starker, Gary Karr, Pascal Rogé, Vassily Lobanov, and Fernando Otero. A documentary film about her was shown on European television. She performs with the New York Piano Quartet, the Delphinium Trio, the Quinteto del Fuego and the Amram Ensemble, and is Jury President of several international chamber music competitions in Europe. She is Director of the New York Chamber Music Festival.

Praised by The Strad for her “intoxicating tonal beauty and beguilingly sensuous phrasing” and “silky-smooth voluptuous tone”, she was featured in a Gramophone Magazine article about her world-premiere recording of Vernon Duke’s concerto (written for Heifetz in 1940). 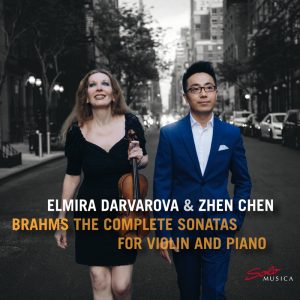