Eliana Burki is the best known female alphorn player in Switzerland and considered one of the finest alphorn players in the world. Hailing from the Swiss canton of Solothurn she has freed her traditional instrument from the confines of folk music and introduced it to the worlds of jazz and blues. Together with her band iAlpinisti she tours the world, and also appear with various string and symphony orchestras in performances of modern compositions (including works by Kaspar Ewald,
Daniel Schnyder and Carl Rütti). Eliana Burki has released four CDs of her own: Eliana (2003), Heartbeat (2007), travellin‘
root (2010) and alpine horn symphonic (EDEL 2013). In June 2012 she signed a contract with the renowned Californian record label Surfdog. In 2013 she won the Prix Walo award in the jazz/blues/world music category.
www.eliana.burki.ch 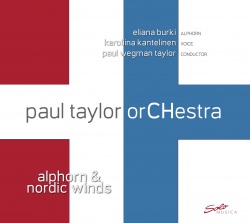