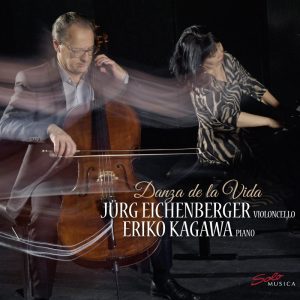 José Bragato and Jürg Eichenberger became close friends when Eichenbergers chamber music ensemble Chamber Soloists Lucerne went on a tour of South America in the summer of 2004. Bragato’s tango Graciela y Buenos Aires is a musical testimony to this love story. As a gesture of gratitude for the invitation, José Bragato then gave him some of his own compositions and exclusive arrangements, including some for cello and piano. danza de la vida is the first compilation of some of these pieces on CD.

The pianist Eriko Kagawa and Jürg Eichenberger have been working together for decades and spent a long time planning a recording of Bragato’s tango Graciela y Buenos Aires and his arrangements of Piazzolla. A conversation with Eriko’s husband, Daniel Fueter, led to the idea of juxtaposing these pieces in all their brilliance with a different, yet fitting kind of music. The name Erik Satie soon sprang to his mind. Daniel Fueter wrote E.S. — eine Hommage (E.S. — an homage) for us. He arranged Satie’s piano pieces for cello and piano and titled the collection “kleine Festschrift zum 150. Geburtstag Erik Saties in 4 Kapiteln” (a little anniversary volume marking Erik Satie’s 150th birthday in four chapters). Erik Satie was born in 1866; Fueter’s arrangements were written in the summer of 2016.

danza de la vida is intended as a tribute to José Bragato, who knew of their plans. He died at a ripe old age shortly before Eichenberger and Kagawa recorded his music. We fondly remembered this great musician and friend during the course of the project.